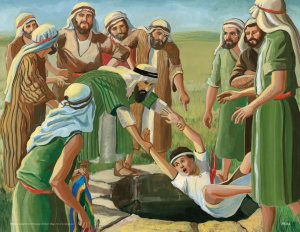 I’ve been thinking a lot about Joseph this past year or so. Not Joseph, the adopted dad of Jesus. No, I’m talking about Joseph- the arrogant, young leader who had a vision from God.

You probably know the story: Joseph shared his God-given vision with those closest to him and what happened? He ended up in a pit. That’s when his dream died. Then things went from bad to worse.  He was falsely accused and he ended up in prison. I would bet all my guitars that he started questioning God’s plan and started doubting the vision that God had given him. He was in a dark place. A hopeless place.

God had a plan for Joseph’s life. His timing was just WAY different from what Joseph probably thought was going to happen! God used Joseph in a powerful way to bring salvation to people far from God. And out of those circumstances, a people of God was formed.

So if you are like me, and you’ve had the birth of a dream and then faced the death of that dream- take heart. God is there with you. God is here with me. His timing and is ways are probably just a lot different from what we expect!

God is in the business of re-birth. Of resurrection. And even now, in that pit, in whatever hopeless situation you find yourself, God is there. He gives life and hope and purpose. We just need to trust and wait on our God. Its not easy and we will struggle and doubt- but God was and is and will continue to be faithful and true to His word. And you know what? That’s great news.

3 thoughts on “Joseph, Dreams, and Getting Out of a Pit”